From Bangor Imaging Unit
Jump to navigation Jump to search

The imaging group has four servers.
Odin and Elli are our two active PACS servers. They operate in tandem. Scans from the scanner console go to both machines. pmac2752 hosts a backup PACS. Loki once provided login, MATLAB licences and home directories for the image analysis lab. Loki is currently in storage.

For a full shutdown follow the Server Shutdown Procedures.

After a power cut or full shutdown follow the Server Restart Procedures to bring all the servers back on line.

You are responsible for backing up your data. Bangor Imaging Unit does not backup DICOM data or scan cards.
Scan cards should be set up to automatically push data to both Elli and pmac2752. This provides two on-line copies of your data. If one server fails, your data will be the other PACS. Both PACS store data on RAID-5 arrays. Data should survive a single disk drive failure.
RAID and two servers is not the same as a backup. Someone could delete the data from both servers and we'd have no way to recover it. We also would not be able to recover from a loss of both servers.

We make weekly backups of the three server boot drives with Clonezilla. We keep spare boot drives for both servers and should be able to recover quickly from loss of any single disk drive. We also have a good supply of spare parts for pmac2752.
We backup dcmdb. However this is not a comprehensive backup. 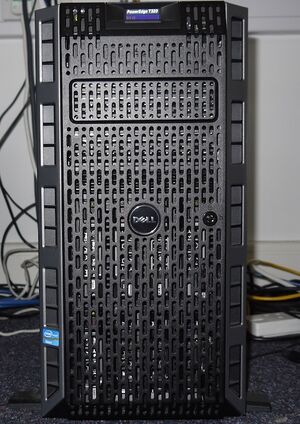 Elli has a 2.2GHz hex-core Intel Xeon "Ivy Brige" CPU and 32GB of high speed RAM.
Online storage hardware is 3 3TB nearline SAS and two 600GB SAS disk drives all connected to a hardware RAID controller. One 600GB drive holds the operating system and applications. The other 600GB drive is a backup for that boot drive. The three 3TB drives are connected as a RAID 5 array that contains the PACS data. A 3TB external drive provides off-line backup.
Elli has five high speed network connections with three in use. One connection is to the university internet. A second connects Elli to the scanner private network. A third is used for only for hardware monitoring. The other two are spares.
Elli runs Ubuntu 16.04 (Xenial Xerus) LTS. This is an April 2016 release, with long term support through 2019.
The PACS server software is DCM4CHEE 2.17.1 running on top of JBOSS 4.2 and mysql 14.14 distribution 5.7.12 for Linux.

Pmac2752 is the backup PACS. As the name implies, it is a backup used to archive oder scans and as stand by hardware incase one of the other servers fail.
Pmac 2752 is shutdown and stored in Andrew's office. It can be brought back on-line in short notice.


pmac2752 is a MacPro(Early 2008) repurposed as a server. From the outside it looks identical to Odin. Inside, pmac2752 has two 2.8GHz Intel Xeon E5462 (Penryn) CPUs and 6GB of RAM.
There four SATA disk drives in pmac2752 connect to the motherboard disk controller.
Drive Bay 1 contains a 500GB Western Digital Caviar Black disk. This high speed desktop class drive is under warranty until August 2019. Drive bays 2,3 and 4 contain 4TB Western Digital Se server class bulk storage drives.
Drive Bay 1 is /dev/sda and contains the boot, rood and swap partitions.
Drive bays 2,3 and 4 are /dev/sdb, /sdc and /sdd. Under mdadm they form the software RAID 5 array /dev/md0.
Norway, A 4TB external drive. is often docked to a USB port as /dev/sde. /dev/sde1 is bootable with Clonzilla. /dev/sde2 should mount as /media/norway. If it isn't sudo mount -a should mount the partition.
We use rsync to make a backup copy of dcmdb. Norway also contains a image backups of /dev/sda. Norway is reference to the starship ECS-5 Norway from the 1981 novel Downbelow Station.

Loki is off-line. Loki is stored in Andrew's office. Loki is a Mac mini Server(Late 2012). Loki has a 2.6GHz Intel Core i7 CPU and 16GB or RAM. The two 1TB internal disks are arranged as separate disks. Server HD is the root drive. Sigyn contains the home directories for the student lab. Loki has a single ethernet port connected to the university network on the .95 subnet. 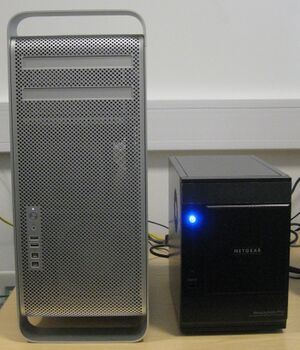 Odin is back. Contact Andrew if you need access.
Odin has two 2.4GHz quad-core Intel Xeon "Westemere" CPUs and 16GB of RAM.


The previous disk drive set and RAID controller are in storage.

November 2016 Wicnserv failed to boot. Summer 2019 Wicnserv given to central IT for reuse or recycling.

Retrieved from "https://biu.miraheze.org/w/index.php?title=Servers&oldid=746"
Cookies help us deliver our services. By using our services, you agree to our use of cookies.